Three long trains from New Orleans wrapped around the bend with gamblers, fight fans and the lovers of violence. It was July 7, and with no destination known, the travelers sat in their own perspiration and counted the beads of sweet on their neighbor’s forehead.  Also on board on one of the trains were two of the greatest Pugilists the world had ever known, John L. Sullivan and Jake Kilrain. Sullivan was the champion of Bare Knuckle Boxing. His knock out of Paddy Ryan in Mississippi City, MS in 1882 solidified him as the Champ.  Kilrain was seen as the up and coming challenger and a fighter worthy of taking the crown. The powerful publisher of the Police Gazette, Richard K. Fox, also backed Kilrain.

The train’s tenants did not know where their journey would end but finally the train stopped and the passenger moved to Colonel Charles Rich’s sawmill in the town of Richburg, MS. Fans and the inquisitiveness gathered around the mill. Men had worked through the night to set up the make shift primitive ring. Ropes marked off the ground but there was no mat or flooring just the hot, hard earth waiting for the combative foes to hit the soil. A fate they would both experience.

By sunrise on July 9, the heat cut through the Gulf Coast air and the smell of expectation and raw violence had engulfed the human mob.  Money, drinking, gambling and the air of criminality permeated the atmosphere. The Governor of Mississippi had sent local police to stop the fight but rumor had it that “Mr. Law Man” had made his plea for the boxers and promoters not to fight than excused himself to other business. Some say he even watched the fight later.

At 10:00 am, it was 104 degrees and the fight began. For over two hours, the boxers beat each other.  The growls of pain howled through the day.  Each man battled and tugged until their lifeblood streamed from their faces. Each blow cutting the flesh and crushing the bones.  Spit flew freely.  Hurting and haunting the combatants disregarded civilization. With each vicious blow, they dealt in their primordial struggle.

John L, the champion was fierce but his training had been rumored to been interrupted by bouts of drinking and running the streets of New York. He had months earlier looked old and out of shape but now he was a primitive animal intent on maiming his opponent. His lean athletic body had shocked the crowd when he arrived to the ring.  But even the “Boston Strong Boy,” looked vulnerable at times. The challenger was steady and hard in the beginning rounds. Meeting the champion blow for blow.

The crowd grasped in round 44 as John L. vomited in front of the masses.  Was the king dead? Had the champion been slain?  Liquor flowed in the audience and by now the fighters were fighting their pain with their own poison elixir of the day, whisky and tea. John L regrouped, cleaned his vomit and the battle continued.  He would not accept Kilring’s offer of calling the fight a draw.

Round after round, blow after blow, each man struggled for supremacy.  The punches landed with such violence that spectators would over the years tell stories of the raw disfigurement of these men.  3000 fans where there and for decades they and a hundred thousand more would tell of the destruction of two men’s faces, bodies and souls in a small Mississippi town. And none of them had exaggerated.  Not even the people who never saw the fight. Legend was born.

For the next 32 rounds, Sullivan advanced on his opponent.  Beating, pounding and crashing his foe, the clubbing was so intense that after Round 75, Kilrain’s team stopped the fight and threw in the towel.  They threw in the towel not because Kilrain was injured or they feared more physical damage.  No, they stopped the fight because they feared their boxer was about to die. They feared that right there under the Magnolia State sky on a hot Gulf Coast day their colleague and friend would perish. 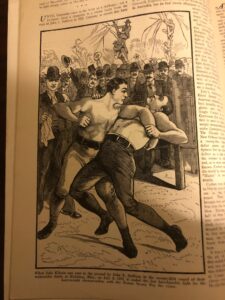 This would be the last “Bare Knuckle” Champion fight under the London Prize Ring Rules.  Three years later, John L would defend and lose his title against “Gentlemen” Jim Corbett in New Orleans using gloves under the Marquess of Queensberry Rules and for many this event was to serve as the beginning of modern boxing era. Boxing as we know it had been born.

The fight had caught the imagination of the public and law enforcement officials. Mississippi Governor RobertLowry had put out a bounty on both man’s head and before each man had gotten home they had been arrested.  Sullivan in Nashville and Kilrain in Baltimore and returned to Mississippi. After appeals, Sullivan would be fined only $500.00 and Kilrain conviction would have him serve two month in jail and fined $200.00. And only in Mississippi, Kilrain would serve his sentence at Colonel Rich’s house.

For one day, July 8, 1889, Mississippi was the King of the Ring.  Under the hot summer sun, two men participated in a ruthless slugfest.  For 75 rounds, two men showed the limits of brutality and savagery.  For over two hours, they pounded themselves into pulp.  Blood, alcohol and money, over a half million dollars worth a bets, flowed and one man remains a legend.  John L. stood above all other athletes that day.  A champion’s champion for the ages.