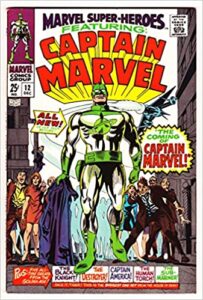 The Marvel Cinematic Universe has eclipsed anything that DC Comics has done in the movie business and Marvel’s domination has a strange deja vu quality to it. It happened before in the 1960s-70s, when Marvel overtook DC Comics as the leader of the comic book industry. And, as easy as it would be to give Marvel all the credit, it was a string of unforced errors that contributed to DC’s fall from its hefty lead.

One of these moments was DC Comics’ inexcusable mistake of forgetting or neglecting to move forward with obtaining the rights to the name and character “Captain Marvel” from Fawcett Comics. This was not some minor mistake about a minor character. This was a colossal mistake that best illustrates the sloppiness and laziness that was DC Comics in the 60s. Captain Marvel comic books had been a dominating force in the 1940s and their sales were even greater than Superman’s sales.

By this time, Marvel Comics had copyrighted the name “Captain Marvel” and assigned it to their new Kree warrior, Mar-vell.  The new character was born in 1967 and was created by Stan Lee and Gene Colan. With this move, Marvel had swooped in and taken advantage of a clerical mistake and captured one of the most recognizable names in the history of superheroes. Marvel Comics once again had out-worked, out-hustled,and out-thought the competition. 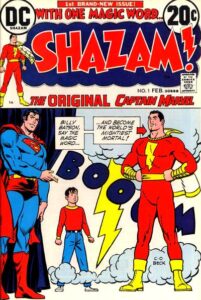 When the “Real” Captain Marvel had made his DC Comics debut in 1973, the title of his book was “Shazam.” The subtitle with the caption, “The Original Captain Marvel,” would be removed from future books because of threats of legal action from Marvel Comics. So, this once-proud superhero has functioned without a real name for decades – all because of a lack of insight from DC and Fawcett Comics publishers.

As the years have progressed, both Captain Marvels have been part of the their individual comic publishers’ world with, Marvel’s Marvel going through a number of changes over the decades. Both have also had the stories brought to their company’s cinematic universe. But, only one character has a name and that is a pity. Many viewers do not even know that Shazam has a real name and that name is CAPTAIN MARVEL.

This is a shame. The “First” Captain Marvel was an icon, and his titles to include the original Marvel Family were part of the comic landscape for years.  He is part of the “Golden Age” of comics, and his name and image should be part of comic lore. But, for many, he is Shazam. And that is truly unfortunate. Maybe one day…The Icon will get his name back. He is THE Captain Marvel.