Growing up in the late 1960’s and 70’s, superhero comic books were a big part of my life. It was a weekly pleasure to pick up my preferred titles: Batman, Spiderman, the Fantastic Four and my personal favorite, Captain America. I loved all the superheroes, but Marvel Comics were my first choice. As a matter of fact, only the great Batman stopped me from buying just Marvel Comics. I would not buy any other DC Comics titles until I picked up all my Marvel favorites first.

What was different about comic books and comic book characters then was that, with the 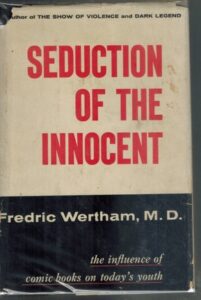 exception of Batman and Robin and Superman, most characters were unknown to the general public. Comics were seen as child’s play at best or dangerously rogue at worst. Fredric Wertham’s damning book, Seduction of the Innocent, was released in 1954 and it almost single-handedly killed the comic book industry.

With the creation of the Comic Code and the death of horror comics – both due to Wertham – the comic book industry was reeling. Wertham’s book created the illusion that comics were for children and that they were a plot against society.  Neither concept was true, but the allegation stuck, and the business was tainted. And the stink of the uproar would damage the concept of comic books for decades.

In 1956, a new DC Flash was introduced to the comic world and the Silver Age of Comics began. Marvel would soon jump into the superhero game in 1961 with the Fantastic Four. Created by Stan Lee and Jack Kirby, the Fantastic Four kicked off the Marvel Universe that is still alive today in comics and the movies. Lee and Kirby introduced a different type of superhero, a superhero that had problems and weaknesses. We take this for granted now, but in 1961 it was a revolutionary idea. Lee and Kirby would expand their ideas and their back-stories would drift into every Marvel title.

Over the years, I would revisit these comics and I began to read the issues I loved most. It was during these times that I realized what I really always knew: comics, especially Marvel, were never written for kids.  I enjoyed them as a kid, but now reading them as an adult, I understand how much I missed. Even the art, with its ’60s and ’70s limitations, was better than I thought. Jack Kirby is even more impressive to me now than he was when I was younger, especially his ’70s work. 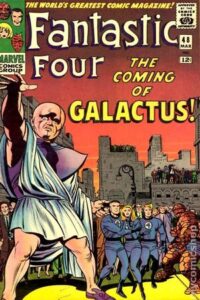 Starting with Fantastic Four issues #48-#50 in 1966, “The Galactus Trilogy,” Lee and Kirby took the Fantastic Four and Marvel to new heights. It introduced the characters Galactus and the Silver Surfer to the world and also opened up a new universe of possibilities.

No longer were heroes fighting comic book villains; these heroes were fighting Gods. There were Old Testament references to characters such as the Watcher and his role in the cosmic story. Comics moved out of the semi-realistic world of New York City and exploded into an intergalactic world of the Gods. These Gods were bent on destroying the universe and these Gods were powerful enough to do it. But Lee and Kirby also created heroes powerful enough to stop the Gods.

In a strange mix of Traditional Judaism, Kabbalah and New World/New Age mysticism, Lee and Kirby single-handedly changed the face of comics and science fiction.  Many of their concepts would be revisited and veiled slightly as Star Trek and Star Wars. Their “New World” would become the backbone of the Marvel Universe.

Jack Kirby would expand on this concept when, after a falling out with Stan Lee, Kirby would leave Marvel and join their main rivals, DC Comics. Once there, Kirby would create the “Forth World,” with such characters and titles as The New Gods, The Forever People, and Mister Miracle. These books were so far ahead of their time that comic book historians still have trouble placing these works with their historical significance. But all one has to do is to read these works and they will understand that they were not written for children.

The facts are that comic books were never written for youngsters, and it was not just superhero books, either.  The horror and war genre were also tough, gritty, and sometime disturbing. The comic code would kill the horror comic for two decades but in the ’70s it returned with a vengeance. War comics tackled hard-hitting topics and often pulled no punches and dealt with war in ways that no child would understand.

Today, people see comics and the movies they inspire as fun and entertainment for people 6-106. The industry, though suffering in the book market, is thriving in the movie industry. Still, at times, I will hear someone say, “comic books are just for kids.” I take a moment and I smile. They are wrong, now, and they have always been wrong. Comic books and their heroes are for us all.