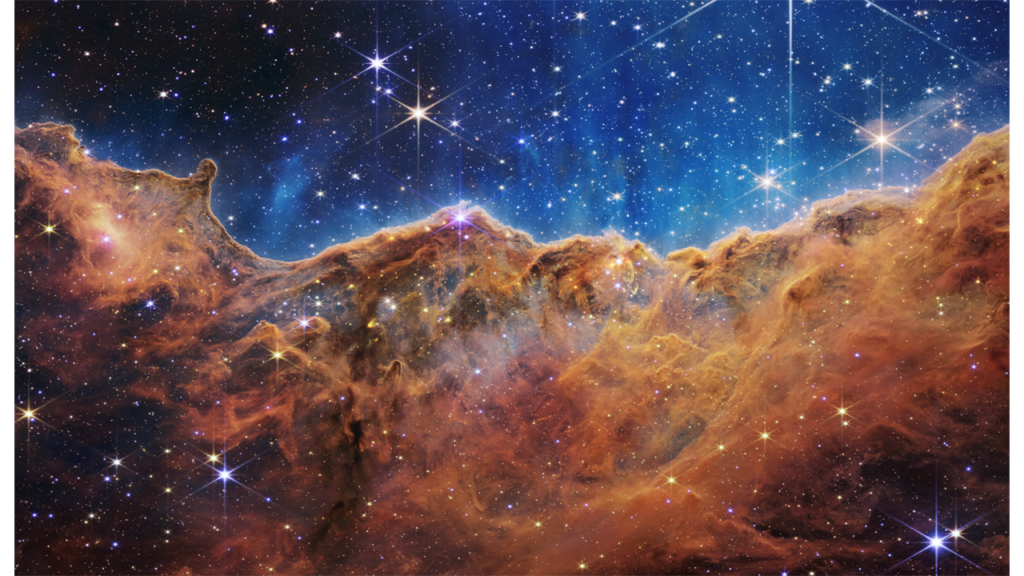 When I first saw the images from the “Cosmic Cliffs” in the Carina Nebula from NASA’s Webb Space Telescope, I was amazed by the beauty and surrealism of our Universe. It is, as if, we live in a masterwork of space, time and art. The picture was so stunning that I felt like I was in a museum looking at a classic piece of art.  Gazing at the work of a celebrated master craftsman, I felt small just observing the wonderment before my eyes.

The first artist who came to my mind when I saw the Webb Photographs was William Blake.  Blake (1757-1827) was the greatest visionary artist to ever live. His contemporaries considered him mad but history has rightfully seen him as the genius he was. He was a revolutionary who stayed true to his religious beliefs in spite of being at odds with the organized religions of his time. Blake’s vision of a God greater than man’s wildest understanding held him true to his convictions.

A 100 years later Swiss psychiatrist, philosopher, painter and artist Carl Jung would tackle these same heavenly issues. Jung’s Red Book would, in words, address these same issues of “otherworldliness.” What Jung did with his writings and paintings, Blake did with his watercolors. They took you to a world where you could see the marvels of the universe only if you allowed your eyes to see.

The small gallery of Blake’s work SGC has included in the article is only a microcosm of his greatness.  Blake’s brilliance could fill up the entire website and it will still not show his importance. It is that vast.  All lovers and practitioners of art should study the work of this special man.

The art of the supernatural and the wonder world of the spiritual are often neglected in the modern world. Lost behind man’s desire for science and pop culture.  Now, here the “Science of the Nebula” stands before us in all it magnificence.  Calling for us to look at the hereafter and wonder what other splendor or intelligence lies in the Heavens. Maybe Blake knew more than us all.

A glorious review of some of William Blake’s masterpieces:

Blake was also a world-class poet. His writings inspired the hymn, Jerusalem, which is a classic praise and considered by many as the unofficial National Anthem of England.

And did those feet in ancient time,
Walk upon England’s mountains green?
And was the Holy Lamb of God
On England’s pleasant pastures seen?

And did the Countenance Divine,
Shine forth upon our clouded hills?
And was Jerusalem builded here
Among these dark Satanic Mills?

I Will not cease from mental fight;
Nor shall my sword sleep in my hand
Till we have built Jerusalem
In England’s green and pleasant land

ELP version is below: