Image by Jackson David from Pixabay

Sometimes they would ride to the Palms restaurant on Friday nights. The boy loved the chopped steak, and the grilled onions and gravy the cook poured over the meat. The father often joked that he had never seen a boy of 8 who loved onions so much. With the promise of onions and Christmas lights, the boy’s day at school passed very slowly. At recess, the boy and his friends chased each other in the field and among the small oaks near the playground’s edges. The air felt like early spring, but even as he played and ran and laughed the boy looked forward to the 2:30 bell and the 229-step walk home.

When the boy arrived, he saw that the father’s truck was not in the driveway. He was not concerned. The father was a roofer, so he sometimes worked even on December days if the Georgia sun was warm. It had been warm all day.

The boy didn’t worry because he knew the mother left her job as a secretary at noon on Friday. She would be there waiting for him. Her car was in the driveway and he placed his palms on the hood and felt that the metal was cool to the touch. The father had taught him that he could tell how long the engine had been idle by the hood’s temperature.

The boy removed his shoes at the back door. When he went in, the mother was not in the kitchen. This was unusual. The mother was almost always in the kitchen, even when there was nothing to cook or to clean. The boy’s home had but four rooms and a bath. He looked in the door of the parent’s bedroom and saw the mother lying on the bed. She was wearing her sheer blue nightgown and she was crying. The boy was afraid to cross the threshold to the room, so he stood in the doorway. The boy asked the mother why she was crying but she didn’t respond. The boy noticed that his mother held something shiny in her hand. She cradled it so closely that he couldn’t see all of it but he knew it was his father’s shiny revolver. He knew, because he had seen her cradle it before when she cried.

Normally the boy would go out and play with the other kids in his neighborhood, but he was afraid to leave his mother when she cradled the revolver. He also decided not to turn the TV on, even though Gunsmoke came on at 3. When his father was home, he and the boy would never miss the show. The boy would sit at the father’s feet holding his own shiny toy revolver, ready to shoot imaginary outlaws.

The boy lay on his bed in silence looking at his comic books, the mother’s muffled sobs now barely audible. He had read the comics so much they had become thin at the edges. The boy couldn’t yet understand all the words, but the pictures filled in the gaps of his knowledge.

The boy didn’t realize he had fallen asleep, but when he awoke, he could see that the light had turned all soft and red and he knew the sun was setting. The boy sat on the edge of the bed. He could not hear the mother’s sobs anymore, but he did hear the unmistakable sound of cooking, a stirring spoon hitting the sides of a pot or pan.

When the boy walked into the kitchen, the mother was pouring chicken dumplings into a bowl on the table. He loved his mother’s dumplings, almost as much as he loved the onion-smothered chopped steak.

The pair ate in silence. He didn’t ask where the father was, and the mother offered no explanation. When he finished, he asked if he could take the Christmas tree and decorations from their boxes. The mother only nodded, left the dishes as they lay, and went back to her bedroom.

The boy set up the tree-stand, placed the largest section in it and tried to twist the eye-bolt that held it in place. His hands lacked the strength. He decided to remove all the decorations and place them in groups on the living room floor, just as he had seen the mother do last year. There were 4 strands of lights in the box, each bulb almost as large as a small egg and looking like candy. He plugged each strand into the wall to check them as his father had done last year. Only 2 of them worked, but after tightening loose bulbs and replacing the dark ones, he was able to get all 4 ready to put on the tree. He knew the father would be proud of his competence.

The boy looked at the decorations organized around the tree-stand and felt proud.

The boy watched TV for a while, but none of his favorite shows were on, so he decided to go to his room to look at his comics till he fell asleep. When the boy passed the mother’s room, he noticed she was sitting on the edge of the bed. He hoped the mother wouldn’t notice him passing the door, but she did.

With a wave of her hand, the mother summoned the boy to come to her. The boy complied. When he drew close, she took his right hand and tried to pull him into her arms. She looked at him as if she didn’t recognize him, her nails digging into the boy’s wrist as he struggled to free himself. And then, as if remembering herself, the mother released her grip.

The boy pulled away, escaped to his room, read his comics, and fell asleep with the light on.

The boy went into the living room and looked at the well-organized decorations on the floor. He decided not to turn the TV on lest he wake the parents. The boy opened the door quietly, retrieved his shoes, and went outside.

It was colder and grayer than yesterday.

The father’s truck was next to the mother’s car in the drive. The boy placed his hand on the hood of the truck and the metal was warm against his palms.

Alan Caldwell is a brand new writer. He lives in Carroll County Georgia, but is working on moving to his rural property in 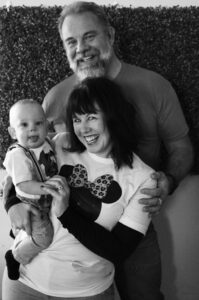 the mountains of Northeast Alabama. He has been married to his lovely wife, Brandi, for 33 years. He has one son, Caleb, who is a firefighter, a daughter-in-law, Chelsee, who is an emergency room nurse, and a brand new grandson, Asher.  Alan has been teaching for 26 years and spends much of his free time outdoors or reading.  Alan has been collecting stories, mostly about his family, for over 40 years, but has just begun writing them down.