Black Mountains roam across the sky.

The moon hides its distance shore

in a bask of remembrance.

A man clothed in deep blue and gray

walks purposefully through the night.

his pale reflection stands in contrast

A shallow heartbeat fills the air.

It’s a small but steady sound.

“It’s all right,” says the voice inside. 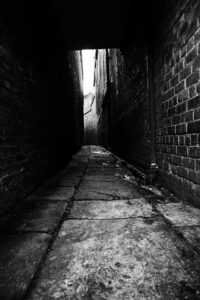 The hair rises quickly on the nape

of his sweaty neck.

An alley awaits open and wide.

The rap of the rats sing from the garbage cans.

The moon turns red and cries.

A cauldron fills the midnight air.

Each one swills through his harden mind.

Down they pull and plunge,

their beauty and terror easily intermixed.

to an eerie silence.

One, dressed in black and lace,

approaches from the west way. 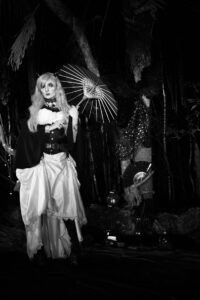 Her skin is white and smooth.

He longs to touch, to taste, to feel,

to drink upon her clear amore.

He reaches to embrace her.

His tongue aches for her nipple’s berry.

She seizes the moment in glory.

Fangs pressed upon his hollow neck,

he feeds her unquenchable desire.

The life flows freely from him to her

as she drinks heartily from his soul’s hot nectar.

She is satisfied, her spirit alive.

She continues her frolic

through the city’s town square.

The stranger lies motionless on the damp ground.

He will be found in the morning’s hot light.